Aaaaand here we are. Another month has passed.  But it’s the holiday season, so I have an excuse, right? RIGHT? Let’s jump right in, I know internet bandwidth is at a premium today.

When we last spoke, I had just started “Essentials of Dining Room.” I got to wear makeup and awesome pants that came up to about my 4th rib. We learned how to carry trays, greet tables, serve from the right, and stand against the wall talking about your customers without them realizing (kidding! that was extra credit). 20% of my final grade was based on my ability to open a bottle of wine.

It’s ok. i’ll wait while you go clean up that beverage you just spit all over the screen from laughing so hard.

Everyone back? So, yes. On the last day we had “server olympics” and it was determined that i could open a bottle faster than anyone else. Shocking.  Someone asked me, “so exactly how long have you been working in restaurants?”  (the impact that has on the speed with which I can access vino, I think is negligible.) I had to think about it–the answer is almost TEN YEARS. holy HELL. long story short: i got an A.

Putting those chef whites back on after 2 weeks was a great feeling (nothing makes a 5am wake-up easier than elastic-band pants).  After nearly a DECADE in the front of the restaurant, that first face-melting blast from an open oven was a welcome reminder of how much i love being in the kitchen.

Traditional European Cuisine had me a little worried we’d only be eating saurkraut and mushy vegetables.  There was a fair amount of pickled and boiled items, but  there was also osso bucco, samosas, short ribs, and rabbit. Our chef took the really interesting approach of making every day a study in how old world and new world foods and techniques have co-mingled over the last several centuries. Can you imagine Italian food without tomatoes? Well good thing someone discovered Mexico.  Irish Stew without potatoes? God bless America. 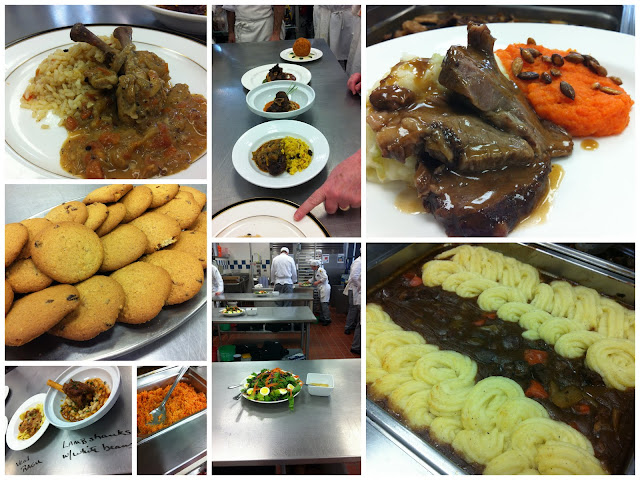 So the traditional europeans love their low-and-slow techniques. that leaves eager culinary students with lots of idle time.  Chef encouraged us to use whatever we could find and make whatever we desired. If it worked, great, if it didn’t well, let’s figure out why.  One of the most fun things we did (and best ways to use up idle time) was make pasta!

Here are a few of my favorite things my group made: pork pozole , osso bucco with risotto (spacing look funny on that writing? i’ll give you 2 guesses who fixed the spelling error. and your second guess doesn’t count), and spinach with golden raisins and pine nuts. 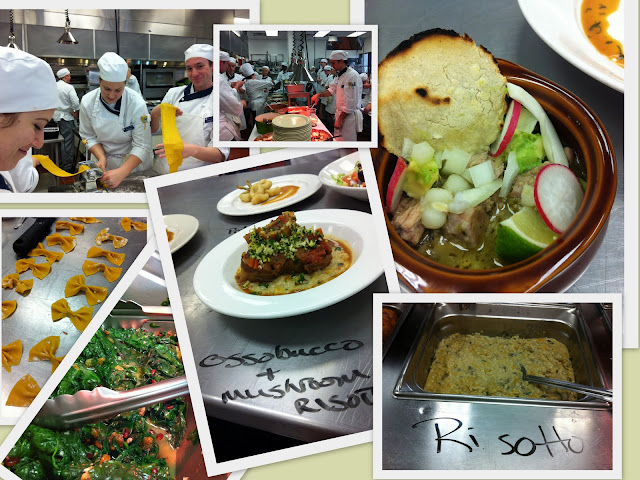 Osso bucco is traditionally topped with a gremolata (lemon zest, parsley, garlic)–that top center picture is a tasting we did of the veal with and without the gremolata.  The way the citrus and herby notes changed the flavor of the meat in your mouth was amazing. I love sh*t like that.

After a week straight of stewed beef, braised chicken, and creamy carbs, we had to step it up.  A group member who shall remain nameless muttered over our reducing sauce, “if i never see mushy meat again it will be too soon.” 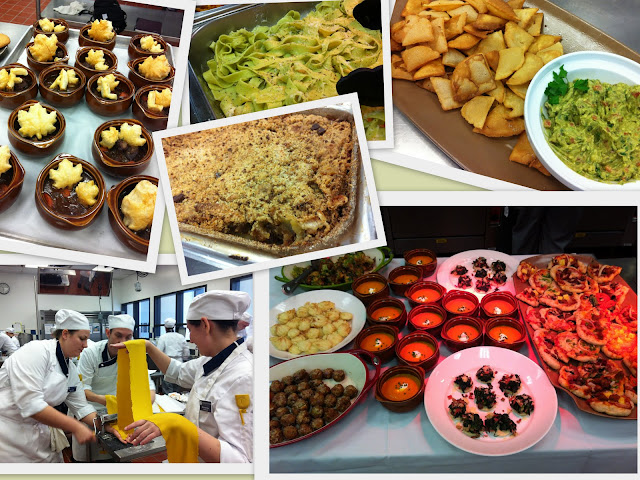 Enter (counter-clockwise from top-left): autumnally-themed individual stews, butternut squash pasta for dayyyyys, grilled pizza and stuffed mushrooms, and my idle-hands creations–guacamole with fresh tortilla chips (why avocados were in the european cuisine fridge I still don’t know), roasted poblano fettucini, and apple crisp with gingersnap crust (we asked for 6 apples, they sent 6 pounds).

For my practical, I had to make a braciole (pronounced bra-shole…naturally), a butterflied flank steak stuffed with spinach, garlic, and parmesean, rolled up, and braised. I served it with citrus-sauteed squash and a sauce from the reduced braising liquid. There is no picture because nothing could adequately capture perfection (or I forgot)–that’s right, i got a 100! Maybe the fact that it was my birthday helped me grab those last few points. I like to think it was the excellently-seared meat.

And just like that, we were done! First quarter: complete.  Looking back, it felt like it absolutely flew by, but thinking about everything I’ve learned makes my head spin.

We had a great looong break for Thanksgiving–quick and dirty recap coming–and we’ll be back in the kitchen bright and early tomorrow. Here’s whats on the docket for the next few months:

I’ve waxed lyrical about what a great cook Auntie K is.  Well, full disclosure: her first name is Mary. And this is a Lamb Stew. Ba-dum-dum.

Anyways, this is one well-travelled recipe.  And probably one of my all-time favorite meals.  Athenian Lamb Stew has been our Christmas Eve dinner of choice for…wow is it 10 years?  Auntie K, Unkie J and the Grandparents have been dining on this since…well probably before I was born.  It all started in a quaint little cottage in humble Falls Church, VA.  I came out to the DC Area and Auntie and Unkie promptly packed up shop and headed for California (love you too, guys).  We tracked them down in dreary Sonoma, CA and continued the tradition.  And now in Chicago, the pots still simmer on Dec. 24.

Countless smiles and belly-aching laughs have been shared over this stew.  There’s a reason it’s stuck around–its GOOD. Tender, tasty, and fills your tummy and your soul. To be honest, I have NO idea where it came from.  The original I can recall is a printed sheet from back when Prodigy was the internet service of choice.

I know you’re all thinking, “enough with this sentimental crap! when are you sticking your arm up a chicken’s be-hind again?”  Patience, grasshopper. While you’re practicing this virtue, MAKE THE STEW.

full disclosure: those instructions were not included in the original.

action shot! into the pot, little ones!

what, oh what, to do with 10 minutes and a mostly-full bottle of red wine...

if you put your stew next to your rice instead of on top, i will judge you.

Wow, you’re thinking to yourself, Lemon Rice sounds good. I wonder how they do that?