Wow so the promise for no more monster posts sure fell through. since we last spoke, i’ve been through 2 more sections–Stocks, Sauces, and Soups and New World Cuisine.  Yesterday was the first day of Introduction to Dining Room–I get to wear my hair down and makeup (yay!) but also have to wear the dreaded Cintas uniform pants. Atleast these bad boys aren’t 100% polyester like my last encounter with uniforms.

I think everyone in my class feel like we’re starting to hit our stride.  Much like any restaurant I’ve worked in, everyone finds their groove.  You may not be best friends with each person, but you find a way to work as a group to get things done.  Rumor has it the professors have been talking about us–rumor has it we’re the rockstars. We’re smart, fast, and look out for each other. I mean, really, who’s surprised. 😉

I have zero pictures from Soups, Stocks and Sauces.  Bechamel and hollandaise do not photograph well. The class was amazing though–the professor was great and we focused a ton on knife skills and cooking techniques.  It was the perfect warm-up to New World Cuisine, where we were thrown Day 1 into producing massive amounts of food.  I can’t imagine starting in a production class with having to learn the fundamentals as you go.

Pictures seem to be the fan favorites around here, so let’s break down the rest that way.

Steam table shots–all the hot food we made each day went into this here steam table. On another table were salads and the carving station.  There were 5 groups, and everyone made anywhere from 2-5 dishes a day.  so. much. food. some of it was standard roasting or blanching of vegetables, rice pilaf, french fries, and some of it was fun things like fried green tomatoes with shrimp remoulade (lower left corner), grilled ribeyes with homemade steak sauce (lower right, sauce made by yours truly), and oyster po’boys (no picture. they didn’t last long.). 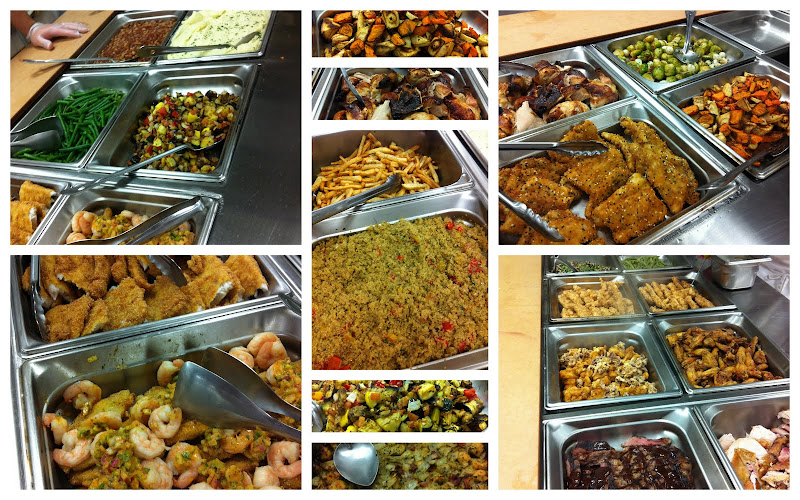 Here are some close ups of the dishes I made with my own two hands:

And the best part–action shots! each day a different class came to eat all the delicious things slaved over for hours (literally) and we served them.  Scooping rice, slicing prime rib, assembling tacos, whatever was needed. I was excused from this task for most of the class thanks to the awesome hacking cough and persistent sniffles that came to hang out for the last couple weeks.

It was a TON of work, and a TON of fun.  Finally working to produce food for people who were counting on you, and having them compliment it was a great experience, and only the beginning.  Reflecting on the last 9 days today with some friends, we all felt a renewed sense of purpose. It was hot and stressful and exhausting. And we want more.  Never once have I resented my 6:30am commute, even when I worked until midnight the night before.  How many people can say that?

Enough with the mushy stuff–Thursday we started Essentials of Dining Room. I’m spending the next two weeks learning to be a server…right. We had to fill out an index card with our front of house experience. Mine took 2.  I was long ago pegged by my classmates as a strong personality (shocking, i know) and today the teenagers were awed by my ability to carry a tray with 4 (empty) entrée plates down a hallway.

Everyone was in a pretty goofy mood after the stress of finals the day before, which led to my group creating the following team name, logo, and slogan.