i took french in high school.  i then promptly flitted off to madrid, SPAIN for a semester in college, where all that french was not so helpful (except for that one day when our 65-year-old señora had a friend-of-a-friend come stay at the apartment and he only spoke french, so she spoke to me and i “spoke” to him. something about a lightbulb.)

well, mom and dad, my french came in quite helpful in this second go-round in higher education. Classical French Cuisine is the class that gets all the culinary kids shakin’ in their boots. The chef is hard, the material is hard, it’s a lot of work.  QUELLE SUPRISE. it’s the foundation of modern cuisine.

first day–chef is jovial, cracks some bad jokes, makes no mistake we understand his immense qualifications, and lays out the course in very clear terms. i can do this.  different from every other class, each student is solely responsible for one specific dish. it’s a traditional french brigade kitchen, so you do have a loose “team,” but you need to come in every day prepared  and ready to rock–solo.

each day started with lecture. we learned lots of important things about the history of french cuisine. 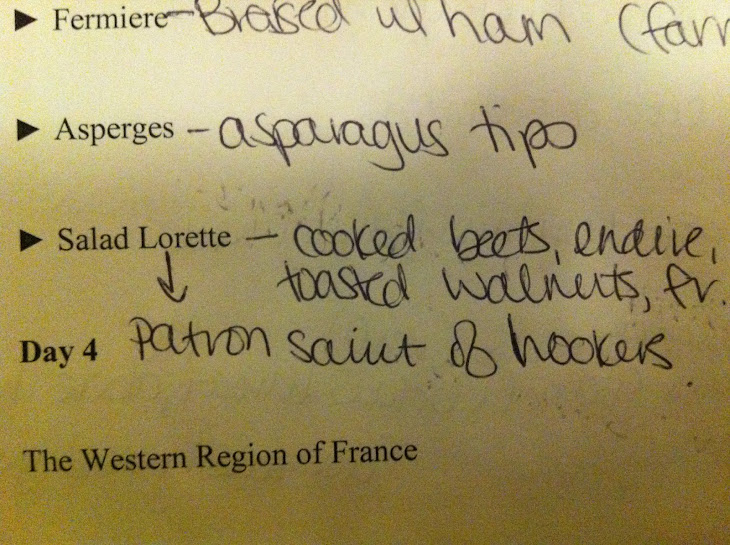 quite smartly, chef connected everything to a story–the person a dish was named after, a region, culinary lore–which not only made it fun, but being the queen of pneumonic devices, made it infinitely easier to digest the large amount of material.

then, we cooked. on the first day, i made a very distinguished pommes puree. mashed potatoes. which was perfect, because on that particular day i had the bubonic plague. but after i came back from my brush with death, I got to make some delicious venison (bambi) with a peppercorn cream sauce and the only thing i took a terrible picture of–thon provoncale (tuna with olives, tomatoes, and herbs) 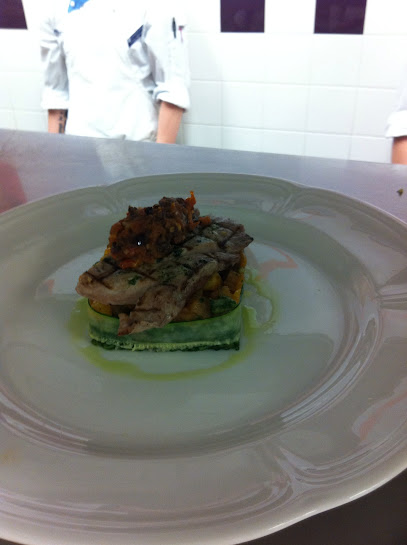 that would be a ring of basil oil (most of which ended up on my apron), ratatouille wrapped in a zucchini slice, and grilled tuna topped with olive tapanade

i had to grill the tuna then flash it to order. seems like a good idea, except that tuna is easy to overcook and overcooked tuna is BAD. so, i used my exceptional poke-it-with-your-finger-and-hope-for-the-best skills, tasted a couple, and said a prayer. After service, the every-charming teacher from the dining room came in, and asked for a tuna for her to eat. huh, she must have thought it looked good.

“this is the first time i’ve had tuna in here that wasn’t GREY!” was what more than a few kids remarked to me. yea!

so each morning even before lecture, we had a quiz on the material from the day before.  10 french words–define them. go. After day 4 or 5, there were an awkward few moments at the end of class where chef called me and another classmate over and asked us a series of strange questions about our assigned recipes for the next few days. we thought we were in trouble. chef comes over and declares, “2 students have gotten 100% on all their quizzes, so I did a tiebreaker, and KAREN, you’re the winner of this beautiful and distinguished Johnson and Wales University baseball hat!” hell yea! (i imagine you understand my excitement was not for the actual hat, but the recognition).

After the requisite jeering from my fellow classmates, a friend who is as southern as they come, comes up to me and says “what did you get for #9? i’d never even seen that word before!”  I said, “oh it’s finely diced mushrooms” She looks at me with sheer confusion and says “but I studied the duck salad with mushrooms, what is this?”

something about a lightbulb.